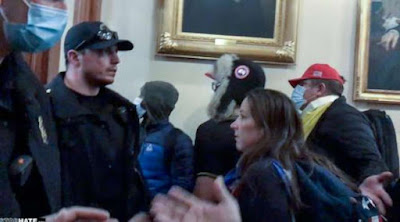 I’ve always felt uncomfortable about the media narrative surrounding Ashli Babbitt’s murder … that she was climbing through a broken window when shot by a “frightened” Capitol police officer.. I can’t believe that any sane person would risk her life in such a meaningless jesture. In the below referenced video, watch Officer Byrd shoot her from almost point-blank range … while she was in a clearly comprised position.

Now newly uncovered video shows quite the opposite … she is seen quietly talking to Capitol police officers and apparently trying to de-escalate matters … see: 90 Miles from Tyranny post.

There are thousands of hours of Capitol surveillance video of this event which has not been released to the public … or even for defendant viewing. Perhaps we have just discovered the reason?

Even more justification to read: Remember Her!

STAND UP FOR ASHLI BABBITT!

In retrospect. instead of shooting Ashli, the guard should have clubbed her, then sprayed her in the face with bear spray, and then locked the trigger of a taser on her with her dangling halfway through the broken window. She'd live...

Rather harsh of you … please reread the 8th Amendment.

Neither cruel or unusual IMHO. Cruel would have been to unload a clip into the wankers breaking down the door. The whole damn situation was unusual.

Why "frightened" in quotes? Those guards were seriously frightened for the whole process of pushing credenzas in front of the doors on their side and observing the glass in the doors getting bashed in. Nothing like this ever happened on their watch. Ever.

He said so in a TV interview. Try thinking “George Floyd” …