President Obama has stopped all oil well drilling in the Gulf of Mexico until we find out the reason(s) for the failure at the BP oil rig.  My question is: how come BP is still allowed to drill the two relief wells to stop the oil from coming out of the original well that exploded?  Do not these relief wells carry the same risks as any other wells that were being drilled?

Others have also asked these questions:
- If one airliner crashed, would we stop all airline flights until such time as we knew exactly what happened?
- What if we never find out the reason(s) for the explosion, does that mean that we never will be able to drill again for oil in the Gulf?
- What about other countries that are drilling in the Gulf (China, Mexico, Iran), does this order apply to them?  And, if so, how do we enforce it?  And, if not, aren't we being economically foolish?
- If, as a result of this moratorium, these oil rigs pick up shop and move elsewhere in the world, how do we entice them to come back?
- Who will insure that the extra-legal $20 billon slush fund just pledged to Obama by BP is spent wisely ... and who will keep it from becoming a huge Democrat honey pot?
Posted by George W. Potts at 8:04 AM 1 comment: 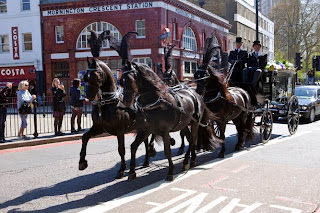 In the southern United States, whenever a funeral procession nears, all the cars on both sides of the road, pull over in respect to let the it pass. This type of behavior is archetypically deferential. May I suggest that this seems to be the type of treatment that Barack Obama has experienced most of his adult life. People have been deferential to him at college, in his community-organizer life, during his stints in state and national legislatures, throughout his campaign for President, and even now as POTUS.  He has respectfully been given the benefit of the doubt by the public and the media … very likely because of his race, certainly because of his oratorical skills, possibly due to his attractive family, and, to summarize, as Joe Biden bluntly said it, he is “the first mainstream African-American who is articulate and bright and clean and a nice-looking guy.”

Now things are beginning to unravel for our ass-kicker-in-chief (see: Ass Kicking). He seems to be unable to demonstrate his management skills to the degree that voters expected when they overwhelming elected him about twenty months ago. I have previously detailed his numerous crisis management failings in another of my blogs: Crisis Management. But, herein I want to briefly explore why he may be so inept administratively. To me, all indications point to the fact that his preparation for the Presidency has been sadly bereft of management experience and successes.

When he was the head of the Law Review at Harvard, he never had to express his own legal adroitness in writing … as was customary for such a position. The fact that his academic records in college have been sealed suggests that there are also some damaging personality failings therein. College professors (rather “senior lecturers” as was the case for Obama) are notoriously unable to manage their associates and departments. (This is why former college professors often make lousy college presidents.) And community organizers seldom have to deal with serious management crises. And lastly, continuously voting “present” in his legislative career suggests that Obama too frequently opted to hide under his desk rather than face difficult governance issues.

Yes, Obama did successfully run (with the help of the Chicago political machine) a stellar campaign for President in 2008. But again, I suspect that he let the wave of deferential media enthusiasm carry him into office rather than having to fight hammer-and-tongs through an even-up political battle. One gets the distinct impression that, now that the exigencies of running the most powerful nation in the world have imposed themselves on his previously unflappable universe, he is in way over his head. His early apology tour of the world, in which he seemed to want to curry favor … particularly with many of our adversaries ... by proudly fouling his own nest … has bought him only a fistful of guano dust. Nowhere has this humble-pie foreign-policy reset solved any of the United States's stickier diplomatic issues. One may argue that he has made most of them far worse. He has kept his own counsel all too frequently and now can only point at others instead of confessing to his own bad advice.

The only hope for us as a nation is that Obama is a quick-study and can mid-course correct while on the job. If not, we will likely suffer some very painful two and a half more years of “hope and change.”
Posted by George W. Potts at 7:27 PM No comments:

These days, television, in particular cable TV, seems to be increasingly able to shape public opinion. Be it the Israeli commandos rappelling down on a Turkish ship running the Gaza blockade … or a live shot of that broken British Petroleum “containment valve” one mile down spewing a cloud of evil oil into the pristine Gulf … or President Obama kneeling down on a Gulf of Mexico beach to examine a tar ball … it is all about the visuals that the news editors can effect on their viewing audience. The term that has gained current popularity for this phenomenon is “optics”. And, I don’t know about you, but I am getting a little tired of seeing that same ten yards of Gulf Coast wetlands with the BP oil slick lapping on its marsh reeds or those same Turkish militants (soon to be martyrs) wailing on the Israeli commandos. And now we are beginning to see oil coated pelicans (pelican?) consigned to bird heaven … covered in immoral BP petroleum.

These visuals can’t be the whole story by any stretch, but the gullible American public seems to be wedded to this form of information pabulum. I may be swimming against the tide here (so to speak), but 45 days into this BP drilling rig explosion, there seems to be remarkably little ecological damage (numerous pelicans die every day from shark attacks) relative to what we have been led to expect by the hysterical video and copy editors. (This morning on Morning Joe they graphically extrapolated the oil slick moving into the Atlantic and polluting shorelines all the way up to Cape Cod.) “A majority of Americans see the massive oil leak in the Gulf of Mexico as a major environmental disaster.” (The Pew Research Center on May 11th)

These dire predictions may in fact transpire if this leak is not contained for months to come, but I for one am skeptical … particularly when I see the environmentalist and politicians expeditiously stepping in to take advantage of the publics’ angst. Viz: President Obama has shut down all drilling for oil in the Gulf for six months (a far bigger economic disaster) and the Democrats in Congress are smacking their lips about using this incident to push through their Cap and Trade (read carbon tax) legislation this summer.

May I suggest that famous Clintonista line? “Let’s all step back and take a deep breath.”
Posted by George W. Potts at 8:30 AM No comments:

The Obama administration has tapped James Cameron (the Director of Avatar) as a consultant on how to solve the Gulf oil-spill crisis. This is because he has had some experience with submersibles, presumably during the filming of Titanic. Now this seems to me to be the ultimate in thinking outside the box on the part of the White House. As a consequence, I have the following suggestions for future administration appointments:

- George Lucas (creator and director of Star Wars fame) to help us plan for NASA’s future after our last space shuttle flight this fall.

- George Lopez (Mexican-American comedian and star of The George Lopez Show) to opine on how to solve our illegal immigrant problem.

- Homer Simpson (star of The Simpsons) to help us plan on how to expand the number of our domestic nuclear power plants … and get rid of our nuclear waste.

- Kevin Costner (of The Untouchables fame) to help us wipe out organized crime.

- Peter Shin (Korean-American and director of The Family Guy) on how to pacify North Korea’s nuclear belligerency.

- Christiana Amanpour (Iranian-American, CNN newsreader and future anchor of NBC’s This Week) on convincing Iran to give up their nuclear ambitions.

- Barbara Streisand (star of Yentl) to help us solve the Palestinian/Israeli conflict.
Posted by George W. Potts at 1:14 PM No comments: