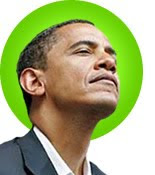 The President held his health care summit yesterday and, as is his wont, dominated the process ... grabbing most of the face time, continually interrupting many Republicans when they managed to squeeze in a few salient points, slipping Senator Paul Ryan the sly finger when he had questioned Obama's arithmetic, and reminding John McCain that it was he who had been elected President. (Oh, how I wish that McCain had said, "could I have a Mulligan on that?") Our President's hubris is becoming his signature characteristic ... just like Gerald Ford was defined by his clumsiness, Bill Clinton, by his mendacity, and George W. Bush, by his oratorical ineptitude. Why Obama is so arrogant is a subject for historians, but may I suggest that his disdain meter often reads all the way over to "hatred" ... hatred for conservatives, hatred for this country's exceptionalism, hatred for our middle and upper classes, hatred for many of our industries and companies, and maybe even hatred for capitalism itself. And this haughtiness, I suggest, may well be his undoing. I would not be that unhappy with this outcome

Now onto a sidebar brought out by yesterday's subject. Howie Carr, a talk-show host here in Boston was taking calls about health care. Someone phoned in from Bangor, Maine and said that the parking lot at the East Maine Health Center in Bangor told the story better than any of these Congressional debates. He said that his cruise through this parking lot showed that at least half the license plates were from Canada. (Also note that the Premiere of Canada also traveled to Florida to have heart surgery ... as opposed to subjecting himself to the vagaries of Canada's socialized health care.) What if Obama and the Congressional Democrats manage to clone the Canadian health-care system here in the United States? To where then are we going to travel to get better health care ... Mexico?
Posted by George W. Potts at 9:56 AM No comments:

The current sovereign-debt crisis in Greece is apparently caused by unfunded off-balance sheet transactions (reportedly aided and abetted by Goldman Sachs ... so what else is new?) I am over seventy years old and I can't remember a single financial crisis, either private or public, which was not caused in whole or in part by off-balance-sheet shenanigans -- last year's banking crisis, Mexico's near collapse in 1994, the Enron scandal, AIG, Tyco, etc. ... the sliminess goes on and on. How can the accounting community, which has created such a beautiful mechanism for faithfully representing the fiscal health of corporations, charities, and public trusts, continue to allow these entities to subvert this process with off-balance-sheet transactions of any type? It is as though the Swan Lake ballet was being danced in a garbage dump ... or Mozart was being played with kazoos.

Until such time as veracity is returned to the accounting profession, we will continue to enjoy a conga-line of financial crises into the forever future. And this, unfortunately, includes how we, as a nation, keep our own books.
Posted by George W. Potts at 11:24 AM No comments: 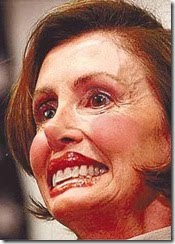 where your children (and grandchildren and great grandchildren) are? This woman has built candy-covered gingerbread houses all over California ... just waiting to lure our innocents into her fiscal oven. She is using promises of free-health-care gumdrops, no more carbon-dioxide spinach, chocolate-covered civilian trials for terrorists, and ice-cream-sundae federal deficits into the hereafter to seduce them to their doom. And when she has corralled all our little ones and turned them into cinnamon cookies, she will use their rendered baby fat to keep her ruby-red lips pouty. Please! please! do not let your children again vote for this cackling crone.
Posted by George W. Potts at 1:09 PM No comments:

Dan Quayle could not have said it better than Barack Obama at yesterday's Prayer Breakfast ... referring (three times) to a Navy corpsman. I didn't see or hear these Presidential snafus on any news show this AM. Amen.
Posted by George W. Potts at 8:15 AM 5 comments:

Indulge me the following scenario: A Muslim man in his early twenties is picked up

in Boston because his cell phone has been the source of a series of suspiciously encoded text messages to a known Al Qaeda operative in Yemen ("The pumpkin pie is in the oven," etc.) These intercepts were done by the NSA under the aegis of the American Patriot Act. (Trust me, they can do this.) He is then found to be in this country illegally ... and when his clothing is scanned by a Geiger Counter it exhibits a dangerously high level of radioactivity. His laptop computer is also found to have detailed and credible diagrams of a suitcase nuclear weapon. Other notable intelligence suggests that an illicit atomic bomb has been smuggled into the United States and is now hidden somewhere, ready to be detonated.

For you Pollyannas who believe that such an event is impossible, please explain 9/11. Now, how do you, as our head of Homeland Security, deal with this captured Muslim man to find out the who, what, when, where and how of this possible devastating terrorist attack ... knowing that it might kill hundreds of thousand of Americans and set back our economy for possibly a generation? And, obviously, time is of the essence. Would you immediately and continuously waterboard him until he spilled the beans or, perhaps, read him his Miranda rights and lawyer him up?
Posted by George W. Potts at 4:12 PM No comments: