The federal government (read the Pelosi/Reid lunatic ward) has just allocated $200 million to bail out the NBA. Are we f…ing crazy? We give this corrupt “Show Me the Money” organization our hard-earned tax money so that their million-dollar, gold-brick players can get more tattoos and wear more bling-bling? Perhaps we should just cede our government to Donald Trump or Bernard Madoff and get it over with?
Posted by George W. Potts at 8:47 AM 2 comments:

Conspicuous Consumption -- Take a few hours off one afternoon and watch some of the teen-directed cable channels (such as MTV) and gag your way through their presentations of the newly rich and famous (rap stars, professional athletes, etc.) giving us a tour of their McMansions ("This is my video game room." "Here are my paintings on black velvet." "This is my large collection of high-performance cars and motorcycles.") And see if you can find any redeeming social value in such lurid displays of conspicuous consumption.

Turkey Pastrami -- pastrami needs to be made from juicy beef brisket and marbled with copious fat … otherwise it is just spiced cardboard. Making pastrami out of turkey is like constructing Manhattan skyscrapers out of Tinker Toys.

Multi-colored Kids’ Plastic Outdoor Stuff -- I don't mind these toddler playground contraptions hidden away IN THE BACK YARD! But increasingly brain-dead parents are placing them in highly visible locations so that many houses are taking on the appearance of a McDonalds' playpen.

Child Car Seats -- I understand the need for infant car seats … but now we must place children up to their Sophomore years in college in contraptions that cost too much and do nothing but take up sitting space in our cars. Parents with more than two small children are therefore compelled to buy huge SUVs or vans just to hold these child cages proscribed by our nattering class.

"American people want …" -- Politicians who aver (usually on Cable TV) that "The American people want … blah blah blah". James Carville started this smarmy trend … now followed by such luminaries as Chuck Schumer and Chris Matthews. How these morons (usually liberal) know what the "American people want" is beyond me? I usually DON'T desire what is claimed of me and strongly resent such words being put in my mouth.
Posted by George W. Potts at 11:11 AM 1 comment:

The Dow Jones Industrial Average (DJIA) is down over two thousand points since Barack Obama was elected (from 9,617 to 7.553). I don’t know if this is a contra-indication to “hope and change” or possibly a reaction to the doom and gloom forecasts of Obama and the Democrat party. But it clearly is in spite of the fire-hose of money that is being spewed around ($700 billion of TARP funds, $20 billion to the auto industry, $787 billion in the recent Stimulus Bill to be signed into law today, AND over a trillion dollars of federal guarantees to Fannie Mae, Freddie Mac, AIG, Citicorp, Bank of America and other distressed financial companies.)

Why has this seeming disconnect occurred? Perhaps, because of the constant drumbeat of pessimistic pronouncements coming from the incoming administration. This morning, one talking head on “Morning Joe” suggested that maybe Obama had overdone this negative sell as a way of pushing through his stimulus bill. If this was the cynical case, then maybe our President, now that he has gotten what he wanted and with his marvelous rhetorical talent, could please talk us back out of this hole?
Posted by George W. Potts at 4:17 PM 1 comment:

The fast talking team of Obama/Reid/Pelosi scammed the American people on Friday last when they pushed through Congress (not misnamed considering what “congress” is also a synonym for) the reconciled $787 billion Stimulus Bill with just three shaky Republican votes in the Senate (as opposed to eight dissenting Democrat votes in the House). This was done on the basis that we are in an economic crisis and could not spare one extra day for our legislators to actually read this 1,073 page tome which, I’m sure, contains item after item of special interest largess. (This reconciled bill was actually published just hours before it was voted on.) However, why then is Barack Obama waiting four extra days to sign this bill into law in Denver on this following Tuesday? Could not this time have been better spent uncovering all the Democrat agenda goodies hidden amongst the reams of camouflage? Perhaps these traipsing triplets could not wait for the voters to find the pea (pee?) under their rapidly moving walnut shells?

In the next six months the Obama presidency, I hope, suffers the drip, drip, drip in the media’s uncovering these honey dollops ... until such time as it becomes necessary for the next stimulus hog fest.
Posted by George W. Potts at 9:52 AM No comments: 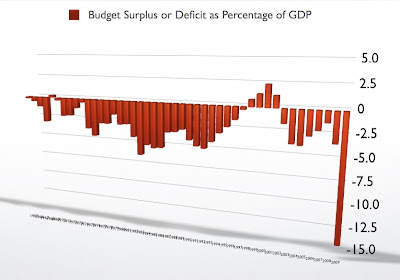 Show this to your grandkids. And then have them save it for their grandkids. (The last bar is 2009.)
Posted by George W. Potts at 9:42 AM 2 comments:

I should be supportive of Tim Geithner because he is from my alma mater. But his performance today, explaining our country’s financial itinerary out of our current economic crisis, was sub par at best. We were told last night by the Chosen One in his prime-time address to expect great things from his new Secretary of the Treasury, the Artful (tax) Dodger. Instead of getting St. Peter, we got a peter-out. His performance was devoid of promised specifics (“were not going to give the details of this plan until we get it right”) and was long on blame for his predecessors (of which he seems to forget that he was one). And, as a result the stock market is down 382 points and Obama has had to improvise in his Ft. Myers speech and pledge to redo things early next week.

Throughout his performance Geithner had that deer in the headlights look that George Bush was often criticized for having … thus Geithner’s new nickname, Bambi.
Posted by George W. Potts at 5:20 PM No comments:

Last night I heard some info babe on MSNBC refer to Sarah Palin as “Caribou Barbie” … bragging that she was the one who coined this appellation (she didn’t use the word “appellation” as I think it was above her pay grade.) I just Googled these words and find that Stephanie Miller, a progressive radio talk show host, is credited with this snot-nose term. And apparently this insult has been around from before Sarah Palin made her appearance on Saturday Night Live. (Surprisingly, Stephanie’s late father, William E. Miller, was Barry Goldwater’s running mate for his failed 1964 bid for the presidency.) Ms. Miller’s talk show, “The Stephanie Miller Show”, is L.A. based (surprise, surprise) and apparently is also in modest syndication (including Sirius Satellite Radio) … although I’ve never heard of it before.

So, I’ve been asking myself why am I bothered by this elitist comment? … particularly, when I am not upset by Rush Limbaugh’s insulting term, “femiNazi” or his aphorism,“feminism was established so as to allow unattractive women access to the mainstream of society.” I think what puzzles me most is why liberals seem to hate Sarah Palin with such a crazed zeal. It feels that liberals despise her mainly for her old-fashioned values (self-starting, family-first orientation, corruption fighting, rugged individualism, etc) combined with her good looks. To pose an analogy -- if Barry Goldwater (ironically) were to have a child with Annie Oakley, the result would be something like Sarah Palin. Perhaps (to play psychoanalyst), Stephanie Miller may be exhibiting a latent hatred of her father and consequently his politics? Or maybe she just wants to get more ink (like this blog entry).
Posted by George W. Potts at 4:21 PM 2 comments:

When I predicted that, after the election was won by Obama, the Democrats and the main stream media would stop talking down the economy. In fact the drumbeat of doom and gloom has intensified to the point of near hysteria. But, I now predict (with much more confidence) that, after the Democrats’ spending (er, stimulative) bill gets passed, that suddenly, within weeks if not days, the sun will rise, the birds will be singing, and the wind of Obamania will blow away the specter of economic catastrophe. This will occur despite the fact that the true impact of these spending (er, stimulative) provisions will not kick in for months or even years (and in most cases, never).
Posted by George W. Potts at 2:47 PM 4 comments:

Nearly one million people are without power in our Nation’s midsection going on the sixth day. At least forty-two people have died as a direct result of devastating ice storms that have left the center of the country (mostly rural Ohio, Kentucky, Texas, Missouri, West Virginia, Oklahoma, Indiana, and Virginia) gripped in continuous sub-freezing temperatures. No heat, little water, and in many cases sparse communications are the plight of over 500,000 homes -- a huge swath of U.S. citizenry have been forced from their houses. This devastation is not as large as was experienced with Hurricane Katrina (with over one thousand deaths directly and indirectly attributed to the hurricane) … but this one is spread over a much large area and has about the same number of people having been dislocated as was the case in New Orleans … but, hopefully, for a much shorter time.

Local officials are upset at the poor response from the states and the Federal Emergency Management Agency. What has President Obama been doing? He did declare a federal emergency for Missouri – five days after the fact. But he hasn’t even flown over the region in Air Force One to inspect the plight of this mostly white area of the country. Instead, he is throwing a Super Bowl party in the White House where the steaks served cost $100 per pound. Many have been speculating as to whether President Obama indeed has much empathy for the citizenry of these mostly “red” states.

[I do realize that this, although accurate, is grossly biased reporting, but I am just trying to mimic how the drive-by media excoriated Bush after Hurricane Katrina.}
Posted by George W. Potts at 1:28 PM No comments:

I’ll swap you one old Russiagate and two Jan 6ers for a Biden election-fraud rookie card. STAND UP FOR CONSPIRACY CARDS!