Dartmouth College has once again come up almost empty when prestigeous international scholarships are handed out to outstanding seniors. (Well, we can still console ourselves with the fact that we have a crackerjack football team.) Perhaps the recent vote by the alumni regarding the proposed new constitution may be reflective of this situation. See the below links for the bad news:

Fulbright Scholars (not):
http://www.fulbright.co.uk/awards/announcement.htm
To be absolutely accurate, eight Fulbright awards were awarded to Dartmouth students to study outside the United Kingdom. See http://www.dartmouth.edu/~news/releases/2006/05/18.html

To repeat myself, I once asked President Wright at a luncheon in Hanover why Dartmouth didn’t have more Rhodes, Fulbright, and other senior honors scholars. His response was stupefying … he said he didn’t want students, who tried for such honors and failed, to have this failure define their Dartmouth experience. (We must have a lot of self-satisfied students.)
Posted by George W. Potts at 1:52 PM No comments:

The President has invited suggestions for solution to the Iraqi conflict. Being bold beyond logic, I will wade in with the following advice. (And since Americans are still dying there, I will try to avoid being humorous or flippant in this analysis … a temptation that many TV personalities can’t seem to resist.)

I view the mayhem in Iraq consisting of three distinct belligerent activities:

The strategies that I suggest we might use in dealing with each of these categories are:

1) Ignore them, and discourage the front-page reporting of these incidents … since the American public can’t seem to differentiate between this category and the other two. I see the torturing and killing of bad guys as just doing the jobs that American troops are forbidden from doing. Sunnis capture Shiite bad guys, torture them to get the names of other Shiite bad guys and then go kill them all … and dump their bodies in Baghdad. And the versa for Sunni bad guys killing Shiite bad guys. After about ten years of this bloody attrition, there should be a lot fewer bad guys … and/or the appetite for such revenge killing might be somewhat abated.

2) Retaliate brutally against the specific group that sponsors each incident by killing one or more of its leaders (e.g., Al Sadir, etc. if Shiite and Ibrahim, etc. if Sunni) or spice up one of these militia demonstrations with a Hellfire missle. Make sure that Al Jazeera understands and publicizes our reason for such retaliations. And use the Iraqi forces to capture any specific perpetrators not already dealt with. Measure the Iraqi forces effectiveness by how often they succeed in these missions (and reward them accordingly).

3) Concentrate all American hegemony against the Jihadist incidents. Use focused air power and Special Forces against these Jihadists and their protectors. Be as brutal as possible, and don’t stop until at least ten Jihadists or their protectors are killed for every American casualty.
Posted by George W. Potts at 9:37 AM No comments:

I have a few observations about the recent congressional elections:

- Suddenly, when the Dems win, all the voting machines and election machinations are working perfectly.

- In at least three states (Texas, Florida and Ohio), Republicans, who sank under ethics clouds in the last six months, could not be replaced on their state’s ballots. Two years ago, the New Jersey Supreme Court allowed Robert Torricelli to be replaced on the ballot four weeks before the election, despite this being against state law.

- In both Montana and Virginia, where the Republicans lost by an eyelash, there were third party conservative Senate candidates who garnered many more votes than the margin of victory for the Dems. Hmmm?

- The Republicans have not contested any of these election results despite enormous voter registration fraud in Florida, Colorado, Missouri, Nevada, New Mexico, Minnesota, Ohio, Texas, Pennsylvania, Oregon and Michigan mostly instigated by ACORN (Association of Community Organizations for Reform Now), a radical left-wing organization. (Admittedly there is some Republican malfeasance also). Why can’t we throw more of these democracy subverters into jail? See http://www.epionline.org/news_detail.cfm?rid=33

How would you like to have Donald Trump and his assembled companies owe you a few hundred million dollars … and then turn on the radio and hear The Donald flacking for The Learning Annex? He is now appearing on local radio on behalf of this “Make Me a Millionaire” seminar series here in Boston. Things must be somewhat desperate for “You’re Fired” Trump to demean himself to such a level. Perhaps he will be next begging us to learn how to drive a semi-trailer truck?
Posted by George W. Potts at 9:56 AM No comments:

The New York Times this morning has an article headlined “New York Moves to Allow Residents to Change Their Gender on Documents”, and subtitled “Permitting a switch on one’s birth certificate, with or without a sex-change operation”. These headlines tell it all. It is a bazaar continuation of the decategorization of our citizenry. Apparently, if one wishes, one can also change one’s race or ethnicity at will. The Mohegan tribe in Connecticut … owners of the Mohegan Sun casino … can make you an Indian (and a millionaire) just by voting you in as a member of their tribe. And many college-bound teens often chose to call themselves Hispanics or African-Americans to improve their chances of admittance to prestigious colleges. Now you can call yourself a member of the opposite sex just by saying so. Gee wilikers! Had I known this earlier I could have called myself a female (and a lesbian to boot)!

What is next? Can we arbitrarily reclassify our family heritage (I opt for being a close Bill Gates relative). Can we even change our species? (He’s a Homo neanderthalenis.) … or genus? (She’s a platypus.) Or even our phylum? (I’m a molluska.) However, I do draw the line at becoming a plant … or a Democrat.
Posted by George W. Potts at 12:34 PM No comments:

I saw Donny Deutsch’s interview with Michael J. Fox (MJF) last night. Mr. Fox’s demeanor did change from the beginning of the interview to its end but, to me, MJF seemed to get more (excuse the word) spastic, not less, as the interview progressed. This surprised me because I was expecting the opposite. Does this mean that his meds caused this downward spiral? I find it difficult to believe that any medications make symptoms worse, not better. Perhaps, Donny Deutsch altered the sequencing of the interview segments to make a political point? Who knows?

However, it is clear that, once again, science is being used to try to manipulate the political process. This is smarmy and greatly bothers me. Science is, by its very nature, very complicated … too complicated to be distilled into a one minute commercial or even a one hour interview. To expect the general public to understand the ins and outs of genetics or climatology (and then use this knowledge to make a political decision) is naive if not scheming. It often takes years for such scientific debates to be resolved … witness the centuries-long flap over the construct of our solar system.

My understanding of the debate over government funding of embryonic stem-cell research comes down to this – can we force our citizens, many of whom have serious moral objections to the use of this Frankenstein-like experimentation, to nevertheless fund it with their tax dollars? I realize that “Frankenstein” is a pejorative, but then, I think it describes accurately the opponent’s emotions. Of course, people like MJF also have equally strong emotions when they feel that their “cure” from this science might be delayed without government funding.

Stem cell science will surely progress independent of government funding. However, there still will be hanging moral issues around the use of embryos (particularly cloned embryos) as a source of stem cells. There seems to be no dispute about using adult stem cells or umbilical cord blood stem cells for medical cures. But using embryonic stem cells opens up serious moral issues. I guess I have no problem with using embryos that are to be discarded from in vitro fertilization labs for such research. However, first it must be only with the written permission of the parents, and, second, these embryos cannot have been created for the purpose of such research. This last caveat unfortunately will be almost impossible to enforce and is, I believe, the reason why many refuse to consider embryonic stem cell research under any circumstances.

The most disturbing step in embryonic stem cell research would be the use of stem cells from cloned embryos. These stem cells would have the great advantage of genetic identity from donor to donee. Thus, wealthy individuals with serious health problems might eventually have their twin effectively created (cloned as an embryo) to grow replacement organs so that these plutocrats could live almost forever. This truly is a Frankenstein scenario, but, as history has shown … if science can do it, it will be done. God help us.
Posted by George W. Potts at 11:42 AM No comments: 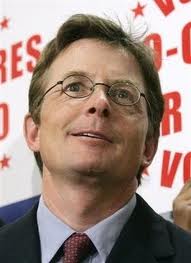 I just heard Donny Deutsch give a promo for his hour long interview with Michael J. Fox this evening (Nov. 2, 10:00 PM on CNBC). In this promo, Donny Deutsch specifically notes that Michael J. Fox’s demeanor changes from the beginning of this interview to its end “because it took a while for his meds to kick in.” I think we all should check out this interview so that we might see for ourselves whether what Rush Limbaugh said early this week makes any sense. Rush said then that Mr. Fox’s commercial (which he had made for the Democrat candidate for the Senate from Missouri … saying that embryonic stem-cell research was essential for developing a cure for his Parkinson's disease) showed him either acting or “off his meds” because the symptoms of his disease seemed overly exaggerated. (Apparently, Mr. Fox had previously indicated in his book that he had used this tactic in the past to exaggerate the symptoms of his disease for effect when he was appearing for public-relations purposes -- like testifying in front of the U.S. Senate).

The result has been another political firestorm where Rush Limbaugh is the ogre and Michael J. Fox is the victim. We now have the rare opportunity to see for ourselves whether Michael J. Fox might have been used as a (willing?) sympathy-producing pawn in the Missouri and other political contests. So watch (at least the first and last five minutes).
Posted by George W. Potts at 3:18 PM No comments: