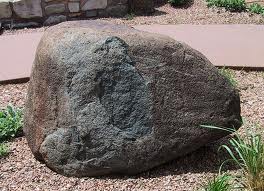 When I was much younger, there was a law in Virginia against sodomy.  In so many words, this law stated that "sodomy is a crime so heinous that it can not be described."  I often humorously imagined what would happen in a courtroom where someone was being tried for this crime.  What evidence could be produced?  How would the defendant counter such a nebulous charge?  What would the judge's instructions to the jury contain?  And how would such a convicted defendant feel spending years in the slammer without any specifics ever having been given at trial?

I was reminded of this enigma this morning watching Morning Joe where there was an allusion to a word on a rock at the entry leading in to a Texan hunting lodge that Rick Perry had used/rented/owned.  No one on this TV show would describe what was on this rock except to decry it and, in hushed tones, say that it could not be specified.  So I had to wait until I read the Powerline blog later in the AM.  Here's where I found what I couldn't hear on Morning Joe -- The Rock.  I'm not writing this blog entry to defend Rick Perry.  You will have to judge this for yourself after reading all the various spins on this "indescribable incident" ... but rather to indicate how amused I am by the lexical temerity of those who are usually so outspoken on Morning Joe.
Posted by George W. Potts at 11:55 AM