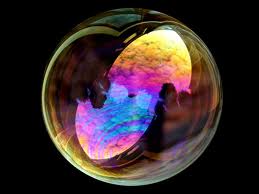 There are a variety of gripes being voiced by the "Occupiers" of Wall Street and other cities ... from "millionaires are evil" to "legalize pot now."  However, there is one complaint that has merit and deserves some focus: "I owe $50,000 [or much more] on my college loans and I can't find a job to begin paying it back."  It is estimated that there are now close to one trillion dollars of college loans outstanding.  This is a particularly onerous burden for such graduates who majored in gender of other hyphenated studies and are all vying for the only jobs they are realistically qualified for -- that of teaching gender and other hyphenated studies courses.  And the entity that they owe this money to is (drum roll please) the federal government ... since The Barry has nationalized almost the entire student-loan industry.  Therefore, a good many of these demonstrators unknowingly hate the very one they love.

The real reason that there is this financial dislocation is that colleges and universities have, for years, been increasing tuitions and fees far beyond the rate of inflation.  And the reason that they have been able to do this is that the federal government has insinuated itself into the economics of this industry with numerous grants, student loan guarantees, and a drumbeat about the importance of a college education.  (Ignoring the fact that neither Bill Gates nor Steve Jobs completed college.)  Somehow, like in the health care industry, whenever the federal government meddles in things, inflation rates there go haywire.

And what have these higher-education institutions been doing with all this largess?  The have bloated up their administrations with Deans of Diversity (kind of like the job Michelle Obama had in Chicago), Directors of Sustainability, etc. ... and their pampered staffs ... as well as numerous professors of gender and other hyphenated studies.  In my opinion, this is the next bubble that is about to be pricked by the exigencies of today's economic situation.  It is difficult to imagine that all the brilliant minds in almost all of these pedagogical institutions don't realize the precariousness of their situation  ... and start shedding administrative and hyphenated professorial staffs so that they might freeze or even reduce tuitions (Princeton possibly being the small exception.)

And, when this bubble does burst, may I make a prediction?  Instead of stepping out of the way and allowing an educational-industry normalcy to get re-established, the federal government will insert itself even further to prop up this silly situation ... with something like TARP II.  Will we never learn that capitalism has its own self-healing mechanisms?
Posted by George W. Potts at 8:05 AM

Is there no shame for universities/colleges to charge $50K+ for tuition and expect a graduate to pay back loans to the tune of $1,000+ monthly payments. These bloated tuitions are being used for dorms that resemble 4 star hotels, gourmet meals, high-end fitness centers, lavish atheletic facilities, etc.

I recently created an infographic about it (I'm a graphics designer + webmaster).

Please check it out here:
http://www.healthcareadministration.com/college/

With the whole occupy wall street thing going on, my goal with this infographic is to educate average Americans how dangerous the financial system is.

If you like it, I would appreciate it if you would spread the word to your readers and link back to my page. Thanks!

Yea even the best student loans aren't that great compared to how it was in past years.