I had a thought last night about this Democrat scam of universal mail-in balloting. Yes, there undoubtedly will be enormous fraud practiced by urban polling officials who hate the Orangeman with a white-hot passion ... their rationale for cheating. However, there is a possible offsetting effect to this fraud.

So, one might expect that, even accounting for fraudulent urban voters (illegals, dead people, etc.), much, much higher participation rates from generally right-leaning and legitimate rural voters might overwhelm urban cheating. Easier mail-in ballots would suddenly allow this to happen.

Wouldn’t that be special ... if universal mail-in voting backfired on the scheming Democrats ...


STAND UP FOR AMERICA!

Once again, there is absolutely no evidence of voter fraud on the scale you claim. Stop listening to Russian Bots. It is not becoming. So glad you live in Massachusetts where Trump will go down like a lead weight on a Titanic Victim. Keep America White. Keep the SCOTUS right wing.

Please explain how 52 voting precincts in Philadelphia can have 100% of their registered voter casting ballots in 2016? Had no one died? Was no one sick? And when Julie Stein was forcing a recount in Detroit then, they promptly stopped it when they opened the ballot boxes and the actual voting tallies submitted substantially exceeded the ballots they found there. And in numerous counties in and around LA, the number of actual vote cast exceeded the number of registered voters. The evidence goes on and on ... mostly in blue cities and states.

I love this one. in Florida, out of prison felons who have not paid any fines or restitutions, cannot vote. Sooo, Michael Bloomberg is now paying tens of million dollars of these required amounts so that tens of thousands of these felons can vote Democrat. How is this not illegally buying votes?

Are we n a second or third wave of the China plague? Clearly, the number of cases are going back up. But what about deaths? And are COVID-19... 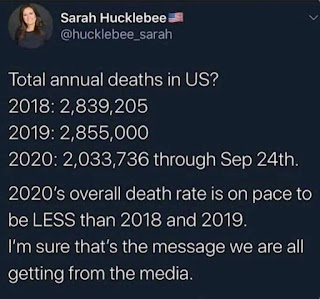